Hymn Parade: When I Survey the Wondrous Cross by Isaac Watts (1707)

To what extent is the crucifixion of Jesus Christ the single most important event in world history?

Galatians 6:14     May I never boast except in the cross of our Lord Jesus Christ, through which the world has been crucified to me, and I to the world.

Isaac Watts (1674–1748) wrote hymns that reflected the theme of the sermon and in a poetic style that was ideal for congregational singing. Before Isaac Watts, hymns often supplemented the Psalms or based on the strict interpretation of Scripture. Isaac Watts is credited with writing 750 hymns! The hymn, When I Survey the Wondrous Cross is inspired by the most important event in human and personal history! 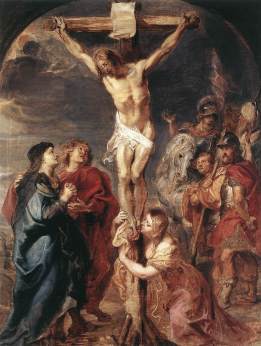 In this painting, Jesus Christ is shown crucified on a cross with three women beneath him weeping with sympathy. Jesus is based in the center of the painting to clearly state the importance of His sacrifice and that the subject of this painting is religious. The use of darker colors makes the sacrifice of Jesus to appear as sympathetic and personal for the viewer. Imagine the impact of the perspective of this painting around the same time as the Pilgrims and Puritans were coming to Plymouth and Massachusetts Bay colony.

Martin Luther wrote in his commentary on Galatians 6:14: “But God forbid that I should glory, save in the cross of our Lord Jesus Christ. “God forbid,” says the Apostle, “that I should glory in anything as dangerous as the false apostles glory in because what they glory in is a poison that destroys many souls, and I wish it were buried in hell. Let them glory in the flesh if they wish and let them perish in their glory. As for me I glory in the Cross of our Lord Jesus Christ.”

He expresses the same sentiment in the fifth chapter of the Epistle to the Romans, where he (Paul) says: “We glory in tribulations”; and in the twelfth chapter of the Second Epistle to the Corinthians: “Most gladly, therefore, will l rather glory in my infirmities.” According to these expressions the glory of a Christian consists in tribulations, reproaches, and infirmities.

It is good for us to know this lest we sink into despair when our opponents persecute us. Let us bear the cross for Christ’s sake. It will ease our sufferings and make them light as Christ says in Matthew 11:30, “My yoke is easy, and my burden is light.”

In this verse Paul expresses his hatred of the world. The hatred was mutual. As Paul, so we are to despise the world and the devil. With Christ on our side we can defy him and say: “Satan, the more you hurt me, the more I oppose you.”