The Calling of the Disciples

How does one become filled with the Holy Spirit?

Matthew 4:18-21: 18 While walking by the Sea of Galilee, he saw two brothers, Simon (who is called Peter) and Andrew his brother, casting a net into the sea, for they were fishermen. 19 And he said to them, “Follow me, and I will make you fishers of men.”[a] 20 Immediately they left their nets and followed him. 21 And going on from there he saw two other brothers, James the son of Zebedee and John his brother, in the boat with Zebedee their father, mending their nets, and he called them. 22 Immediately they left the boat and their father and followed him.

James Tissot, a French artist sees Simon Peter and Andrew fishing in shallow water and close enough to the shore to hear the voice of Jesus. Tissot visited the Holy Land in 1880 and observed local fishermen wearing nets around their waste. 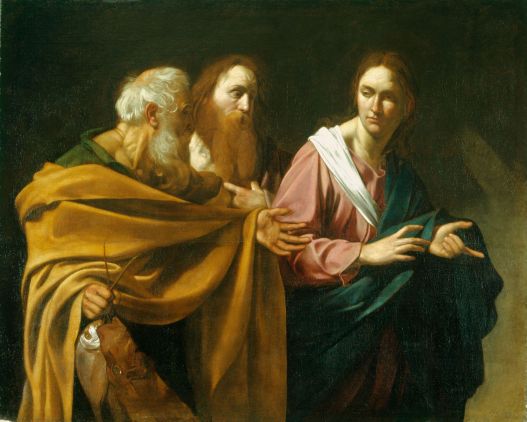 The Calling of Saint Peter and Andrew by Bernardo Struzzo but more recently (2006) verified that this was painted by Caravaggio.

In this painting Caravaggio pictures a youthful Jesus without a beard leading two older brothers. Peter is holding a fish in his right hand and Andrew and Peter still appear confused about what they have just experienced regarding the large number of fish they caught after Jesus directed them to fish in the deeper water.

Martin Luther: In Luther’s sermon on Matthew in 1521, he marks the calling of the disciples as the time for grace to be preached throughout the world. The disciples will minister to people in need, preach to the heathen, forgive sinners, be witnesses that Jesus Christ is the Son of God.

In his sermon on the Monday after Easter in 1525 (Luke 24:13-25), Martin Luther describes the disciples as ignorant fishermen who came to know Jesus Christ through the Holy Spirit.

“‘The apostles likewise, being ignorant fishermen, learned to know the Scriptures, not in the schools of the great scribes, but through the revelation by which Christ led them into the Scriptures. Thus they were enabled to understand and to write on the basis of a single passage a book or a sermon the world cannot understand. And if I had the same Spirit Isaiah or Paul had, I could take this passage and develop from it a New Testament, if that were not already written.

How did St. Peter know, or where is written in Moses that which he says in 1 Peter 10-11: “Concerning which salvation the prophets sought and searched diligently, who prophesied of the grace that should come unto you, searching what time or what manner of time the Spirit of Christ which was in them did point unto?” Who told him that the Spirit of Christ existed and prophesied of Christ, before there were prophets and, above all, before Christ and the Holy Ghost were present? Are these the words of a fisherman, or of a learned, wise scribe? Nay, it is the revelation of the Holy Spirit who had also revealed it to the prophets before.’”