Jacob Doubted God When he Returned Home to Face Esau

When did God surprise you?

Genesis 32: Jacob also went on his way, and the angels of God met him. 2 When Jacob saw them, he said, “This is the camp of God!” So he named that place Mahanaim.

3 Jacob sent messengers ahead of him to his brother Esau in the land of Seir, the country of Edom. 4 He instructed them: “This is what you are to say to my lord Esau: ‘Your servant Jacob says, I have been staying with Laban and have remained there till now. 5 I have cattle and donkeys, sheep and goats, male and female servants. Now I am sending this message to my lord, that I may find favor in your eyes.’” 6 When the messengers returned to Jacob, they said, “We went to your brother Esau, and now he is coming to meet you, and four hundred men are with him.”

7 In great fear and distress Jacob divided the people who were with him into two groups, and the flocks and herds and camels as well. 8 He thought, “If Esau comes and attacks one group, the group that is left may escape.”

9 Then Jacob prayed, “O God of my father Abraham, God of my father Isaac, Lord, you who said to me, ‘Go back to your country and your relatives, and I will make you prosper,’ 10 I am unworthy of all the kindness and faithfulness you have shown your servant. I had only my staff when I crossed this Jordan, but now I have become two camps. 11 Save me, I pray, from the hand of my brother Esau, for I am afraid he will come and attack me, and also the mothers with their children. 12 But you have said, ‘I will surely make you prosper and will make your descendants like the sand of the sea, which cannot be counted.’”

13 He spent the night there, and from what he had with him he selected a gift for his brother Esau: 14 two hundred female goats and twenty male goats, two hundred ewes and twenty rams, 15 thirty female camels with their young, forty cows and ten bulls, and twenty female donkeys and ten male donkeys. 16 He put them in the care of his servants, each herd by itself, and said to his servants, “Go ahead of me, and keep some space between the herds.”

17 He instructed the one in the lead: “When my brother Esau meets you and asks, ‘Who do you belong to, and where are you going, and who owns all these animals in front of you?’ 18 then you are to say, ‘They belong to your servant Jacob. They are a gift sent to my lord Esau, and he is coming behind us.’”

19 He also instructed the second, the third and all the others who followed the herds: “You are to say the same thing to Esau when you meet him. 20 And be sure to say, ‘Your servant Jacob is coming behind us.’” For he thought, “I will pacify him with these gifts I am sending on ahead; later, when I see him, perhaps he will receive me.” 21 So Jacob’s gifts went on ahead of him, but he himself spent the night in the camp.

Genesis 33 Jacob looked up and there was Esau, coming with his four hundred men; so he divided the children among Leah, Rachel and the two female servants. 2 He put the female servants and their children in front, Leah and her children next, and Rachel and Joseph in the rear. 3 He himself went on ahead and bowed down to the ground seven times as he approached his brother.

4 But Esau ran to meet Jacob and embraced him; he threw his arms around his neck and kissed him. And they wept. 5 Then Esau looked up and saw the women and children. “Who are these with you?” he asked.

Jacob answered, “They are the children God has graciously given your servant.” 6 Then the female servants and their children approached and bowed down. 7 Next, Leah and her children came and bowed down. Last of all came Joseph and Rachel, and they too bowed down. 8 Esau asked, “What’s the meaning of all these flocks and herds I met?” “To find favor in your eyes, my lord,” he said.

9 But Esau said, “I already have plenty, my brother. Keep what you have for yourself.” 10 “No, please!” said Jacob. “If I have found favor in your eyes, accept this gift from me. For to see your face is like seeing the face of God, now that you have received me favorably. 11 Please accept the present that was brought to you, for God has been gracious to me and I have all I need.” And because Jacob insisted, Esau accepted it. 12 Then Esau said, “Let us be on our way; I’ll accompany you.” 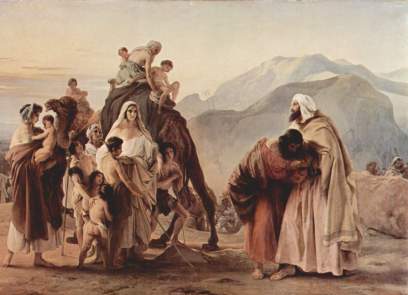 Jacob deceived his father Isaac, who was nearly blind, for the birthright. His twin brother Esau was furious over this deceit and Jacob left the land of Canaan where his grandfather, Abraham, had lived. He has been away from his family for 20 years and receives word that his brother Esau is coming to meet him, with a following of 400 men.

Jacob fears the worst and in his desperation turns to God in prayer. The first lesson he learned was that prayer is not a simple request but a persistent struggle with God. The story in the previous chapter describes a physical encounter with an angel of God with the dislocation of Jacob’s hip. It is a powerful story, similar to how Jesus prayed three times in the Garden of Gethsemane when He was faced with betrayal and death by crucifixion.

We learn in this picture the importance of humility and falling on our knees before God and other people we have hurt. We also learn of God’s blessing in that Esau accepted his brother Jacob and asked for no retribution; only love and acceptance. Hayez portrays the powerful Esau embracing his deceptive twin brother.

We learn the importance of having faith in God and trusting His wisdom over our cleverness – or the advice of Pastor Google and friends. This is such a powerful story for anyone who struggles with a broken relationship, medical issue, alienation, and loneliness. We might say that this story and picture is a powerful lesson about human behavior. In Luther’s lecture (commentary) on Genesis 33, he speaks directly to how God intervenes inwardly to change hatred into reconciliation and acceptance. Luther explains this as a miracle!

“Esau again inquires what these companies are than he may have an opportunity to converse more familiarly with his brother and to emulate him in mutual love and goodwill. It appears that he had not yet received the gifts sent by Jacob. One cannot say what the reason was. Whether it was that he was still burning with hatred and refused to listen to the messengers sent before he saw his brother actually humbling himself, or whether he refused to accept the gifts, moved by special kindness and mercy since he had become milder and had seen the companies offered by his brother, I do not really know. But it seems that he refused the gifts more out of goodwill than hatred.

I will interpret it so that it remains established that this victory worked the miracle that Esau’s heart was changed and placated. So it can be that while his anger was still hot, he set out with the 400 armed men to terrify and kill his brother. But when he saw him humiliated and sending gifts, the Lord’s hand intervened and changed his heart so that he said: ‘Why should I do violence to my brother? why should I take anything from a good and upright man, a needy exile? The Lord has blessed me more bountifully than He blessed my brother; it would be fair for me to relieve his need by the abundance of my possessions. Why, then, should I accept gifts at his hand?’

God works this inwardly through the Spirit, but outwardly through means, the respectful possession and the offering of gifts, although Esau does not seem to have accepted them because of the very great zeal and love with which he embraces his reconciled brother.” (Luther’s Works: Lectures on Genesis. pp.169-170)