How did our grandparents and great grandparent, and the people in our families before them understand the meaning of the Christmas story?

Luke 2: 8-14: 8 And there were shepherds living out in the fields nearby, keeping watch over their flocks at night. 9 An angel of the Lord appeared to them, and the glory of the Lord shone around them, and they were terrified.

10 But the angel said to them, “Do not be afraid. I bring you good news that will cause great joy for all the people. 11 Today in the town of David a Savior has been born to you; he is the Messiah, the Lord. 12 This will be a sign to you: You will find a baby wrapped in cloths and lying in a manger.”

13 Suddenly a great company of the heavenly host appeared with the angel, praising God and saying,

14 “Glory to God in the highest heaven, and on earth peace to those on whom his favor rests.” 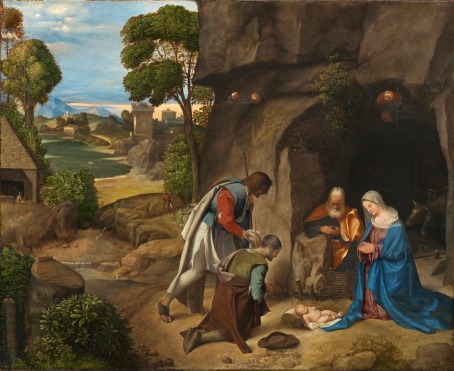 Adoration of the Shepherds, Giorgione, 1500

At first glance this painting of the Adoration of the Shepherds seems unexciting with Mary and an older looking Joseph gazing at the newly born Jesus with two shepherds looking at a naked baby. But the landscape to the left of the painting appears more engaging than the humble birth of God’s Son. Perhaps Giorgione is painting how he envisions Jesus in the world or people in the world connecting with Jesus. This painting is 17 years before the Reformation.

Luther: “The Evangelist shows how, when they arrived at Bethlehem, they were the most insignificant and despised, so that they had to make way for others until they were obliged to take refuge in a stable, to share with the cattle, lodging, table, bedchamber and bed, while many a wicked man sat at the head in the hotels and was honored as lord. No one noticed or was conscious of what God was doing in that stable. He lets the large houses and costly apartments remain empty, lets their inhabitants eat, drink and be merry; but this comfort and treasure are hidden from them.

O, what a dark night this was for Bethlehem, that was not conscious of that glorious light! See how God shows that He utterly disregards what the world is, has or desires; and furthermore, that the world shows how little it knows or notices what God is, has and does.

See, this is the first picture with which Christ puts the world to shame and exposes all it does and knows. It shows that the world’s greatest wisdom is foolishness, her best actions are wrong and her greatest treasures are misfortunes.”