The Parable of the Sower

How does this story from Jesus support anyone who is overwhelmed by the challenges of daily living and troubles of this world?

Matthew 13:1-24  That same day Jesus went out of the house and sat by the lake. 2 Such large crowds gathered around him that he got into a boat and sat in it, while all the people stood on the shore. 3 Then he told them many things in parables, saying: “A farmer went out to sow his seed. 4 As he was scattering the seed, some fell along the path, and the birds came and ate it up. 5 Some fell on rocky places, where it did not have much soil. It sprang up quickly, because the soil was shallow. 6 But when the sun came up, the plants were scorched, and they withered because they had no root. 7 Other seed fell among thorns, which grew up and choked the plants. 8 Still other seed fell on good soil, where it produced a crop—a hundred, sixty or thirty times what was sown. 9 Whoever has ears, let them hear.”

10 The disciples came to him and asked, “Why do you speak to the people in parables?”

11 He replied, “Because the knowledge of the secrets of the kingdom of heaven has been given to you, but not to them. 12 Whoever has will be given more, and they will have an abundance. Whoever does not have, even what they have will be taken from them. 13 This is why I speak to them in parables:

14 In them is fulfilled the prophecy of Isaiah:

16 But blessed are your eyes because they see, and your ears because they hear. 17 For truly I tell you, many prophets and righteous people longed to see what you see but did not see it, and to hear what you hear but did not hear it.

18 “Listen then to what the parable of the sower means: 19 When anyone hears the message about the kingdom and does not understand it, the evil one comes and snatches away what was sown in their heart. This is the seed sown along the path. 20 The seed falling on rocky ground refers to someone who hears the word and at once receives it with joy. 21 But since they have no root, they last only a short time. When trouble or persecution comes because of the word, they quickly fall away. 22 The seed falling among the thorns refers to someone who hears the word, but the worries of this life and the deceitfulness of wealth choke the word, making it unfruitful. 23 But the seed falling on good soil refers to someone who hears the word and understands it. This is the one who produces a crop, yielding a hundred, sixty or thirty times what was sown.” 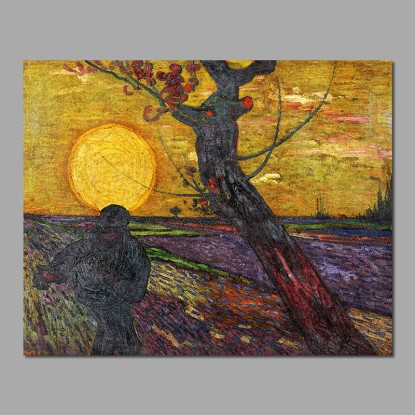 Sower with Setting Sun is a personal and introspective work for Vincent Van Gogh. He saw in the painting, Sower, by another French artist, Jean Francois Millet, the story of Christ’s parable in Matthew 13. Van Gogh understood this parable as the presence of Jesus Christ in a troubled world. Van Gogh studied theology and regarded his art as a form of ministry for connecting people with Jesus Christ. He hoped that his paintings would give hope to the people who are living in spiritually and socially infertile soil. Instead of seeing things in the two dimensions of a painting, Van Gogh believed that God gives us the capacity to understand the infinite dimensions or perspective of living a spiritual world.

Although many who read this story are familiar with it, Van Gogh allows us to engage in his work of art with both our eyes (visual literacy) and heart (spiritual literacy). When we do this, the painting and the words of Christ’s parable have the capacity for changing our life! We see the humble sower on the left whose work is blessed by the sun and the growing tree on the right. The tree represents life, and Van Gogh gives us this tree as an image of Christ’s resurrection and the life changing power of faith! Note the Word of God in John 12: “I tell you the truth, unless a kernel of wheat falls to the ground and dies, it remains only a single seed. But if it dies, it produces many seeds. The man who loves his life will lose it, while the man who hates his life in this world will keep it for eternal life.”

Martin Luther preached a sermon on this parable in 1525 at the height of the violence in the Peasants War:  “The Savior himself explained this parable in the same chapter upon the request of his disciples and says: He that soweth the good seed is the Son of man; and the field is the world; and the good seed, these are the children of the kingdom; and the tares are the sons of the evil one; and the enemy that sowed them is the devil; and the harvest is the end of the world; and the reapers are the angels. These seven points of explanation comprehend and clearly set forth what Christ meant by this parable. But who could have discovered such an interpretation, seeing that in this parable He calls people the seed and the world the field; although in the parable preceding this one he defines the seed to be the Word of God and the field the people or the hearts of the people. If Christ Himself had not here interpreted this parable everyone would have imitated his explanation of the preceding parable and considered the seed to be the Word of God, and thus the Savior’s object and understanding of it would have been lost….  Today’s Gospel also teaches by this parable that our free will amounts to nothing, since the good seed is sowed only by Christ, and Satan can sow nothing but evil Seed; as we also see that the field of itself yields nothing but tares, which the cattle eat, although the field receives them and they make the field green as if they were wheat. In the same way the false Christians among the true Christians are of no use but to feed the world and be food for Satan, and they are so beautifully green and hypocritical, as if they alone were the saints, and hold the place in Christendom as if they were lords there, and the government and highest places belonged to them; and for no other reason than that they glory that they are Christians and are   among Christians in the church of Christ, although they see and confess that they live unchristian lives.      In that the Savior pictures here also Satan scattering his seed while the people sleep and no one sees who did it, he shows how Satan adorns and disguises himself so that he cannot be taken for Satan. As we experienced when Christianity was planted in the world Satan thrust into its midst false teachers. People securely think here God is enthroned without a rival and Satan is a thousand miles away, and no one sees anything except how they parade the Word, name and work of God. That course proves beautifully effective. But when the wheat springs up, then we see the tares, that is, if we are conscientious with God’s Word and teach faith, we see that it brings forth fruit, then they go about and antagonize it, and wish to be masters of the field and fear lest only wheat grows in the field, and their interests be overlooked.”

Thanks to Dr. James Romaine, Associate Professor of Art History at Nyack College and cofounder of the Association of Scholars of Christianity in the History of Art, www.christianityhistoryart.org for his contribution to the research of this blog.